Mughal weapons significantly evolved during the ruling periods of Babur, Akbar, Aurangzeb and Tipu Sultan. During its conquests throughout the centuries, the military of the Mughal Empire used a variety of weapons including swords, bows and arrows, horses, camels, elephants, some of the world’s largest cannons, muskets and flintlock blunderbusses – steel Camel Bone scale

Under the Mughals, the most important centers of production of military equipment were Delhi and Lahore.[1]

Zulfikar, a Mughal sword
Most cavalrymen mainly depended upon the short arms (kotah-yaraq) for close quarter combat. They are classified into five categories: swords and shields, maces, battle-axes, spears and daggers. Weapons used for long range attacks were the bow and arrow (Kaman & Tir), the matchlock (Banduq or Tufanq) and the pistols. Rockets were also used by the artillerymen (Topkanah).

No single man carried all these weapons at one time, but in a large army all of them were in use by someone or other. The great number of weapons that a man carried is graphically described by Fitzclarence, about an officer of his guards. He was a petty officer of the Nizam’s service, who commended his escort:
“Two very handsome horses with superb caparisons belong to this jamadar, who is himself dressed in a vest of green English broad cloth laced with gold, and very rich embroidered belts. A shield of buffalo hide with gilt bosses is hung over his back. His arms are two swords and a dagger, a brace of English pistols(revolver), and he has his matchlock carried before him by a servant.”

Swordbelts were generally broad and handsomely embroidered. On horseback they were worn on a belt hanging over the shoulder. Otherwise a man carried his sword by three straps hanging from a waist-belt.

Prince Dara Shikuh’s sword and scabbard (number 8), at the V&A Museum in London. 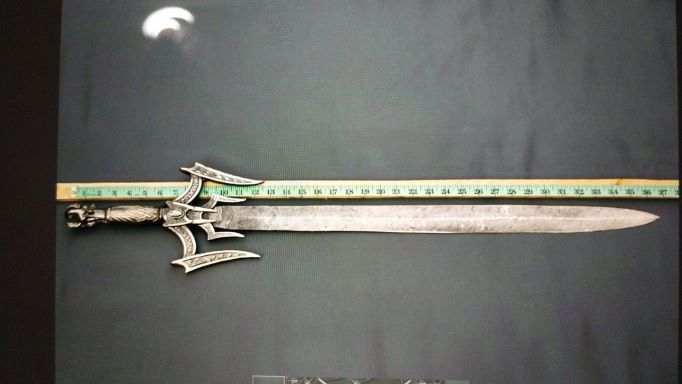 Talwar was the principle blade of the Mughal infantry. By the 18th century it would later be carried by Sepoy.
Shamsher – A curved weapon similar to a scimitar. Purely a cutting weapon due to its shape and the small size of the grip.
Dhup – A straight sword. It was adopted from the Dakhin, this straight sword had a broad blade four feet long and a cross hilt. Considered an emblem of sovereignty and high dignity, it was displayed on state occasions carried in a velvet wrapping by a man who held it upright before his master. It also lay on the great man’s pillow when he was seated at a darbar, a public transaction of business. This kind of sword was conferred as a distinction on successful soldiers, great nobles, and court favourites. It was made of steel.
Khanda – A straight sword. It was apparently identical to the dhup.
Sirohi – A scimitar. This sword had a slightly curved blade, shaped like a Damascus blade, slightly lighter and narrower than the ordinary talwar. They were made in Sirohi with Damascus steel.
Pata – A narrow-bladed, straight rapier with a gauntlet hilt. Often used in performances.
Gupti – A straight sword concealed in the sheath of a walking stick . The head or handle and a fakir’s crutch was closely allied in appearance with the crutch of dagger length and the weapon appearing like a short crooked staff about three feet long. It was used by persons of rank as an emblem of humility.
Zulfiqr – It was a very vital sword in Mughal era, specially used by Mughal emperors (After emperor Aurangzeb) and generals in the battlefield to break the opponent fighter’s sword or short dagger by its own divided blade during fighting and that made to killing enemy more easier on that weaponless situation. This sword was the personal sword of Mughal emperor Aurangzeb which was in service for first 10 years of his reign. But it was discontinued around 1670 as part of the emperor’s austerity measures.